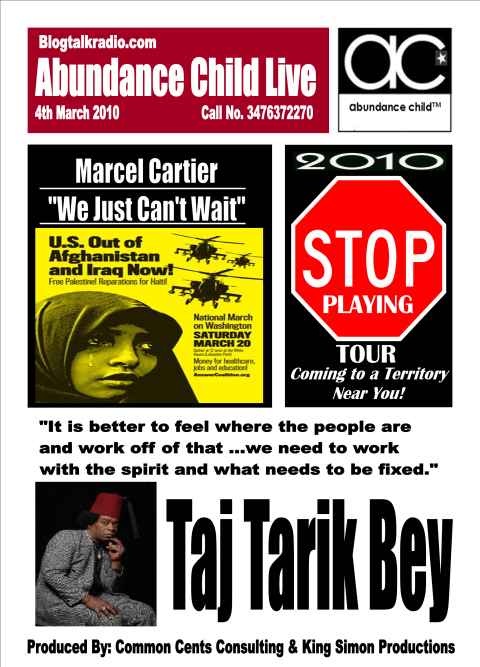 The call for March 20th is “U.S. Out of Afghanistan & Iraq Now! Free Palestine! Reparations for Haiti!”

Marcel Cartier is a member of the Party for Socialism & Liberation (PSL). The PSL is in the steering committee of the ANSWER Coalition

The march has been endorsed by people and organizations such as: Cynthia McKinney (former Congresswoman and 2008 Green Party pres. candidate), the New Black Panther Party, Ramsey Clark (former Attorney General of the U.S.) and many more. For the list in formation: visit http://www.pephost.org/site/PageServer?pagename=M20_endorserslist

The ANSWER Coalition called for some of the largest demonstrations during the Bush-Cheney years. ANSWER took a principled stand immediately after 9/11 in calling for demonstrations against the bombing and occupation of Afghanistan, when it was generally unpopular to do so.

Many organizations that were active during the Bush-Cheney years have ran away from the anti-war scene in the aftermath of the Democratic president Obama taking office. One treacherous group we can mention is UFPJ (United for Peace & Justice). They are basically a liberal group that backs Obama completely and refuses to protest. This is despite the fact that there are currently way more troops in both countries than there were under Obama. In addition, Obama has backed the military coup in Honduras, established 7 military bases in Colombia, and overseen the occupation of Haiti under the guise of “aid”.

The war budget in Afghanistan and Iraq is roughly $8,000 per second, or $12 million per hour.

There are several buses departing from NYC the morning on March 20th and returning the same night. People interested in coming are asked to contribute $40 for the bus fare.